Amazon closes in on Apple in the $1 trillion stakes

At the beginning of this year, Apple’s stock market value was 50% bigger than Amazon’s but now the gap is about 10%.

In the battle for the first company to reach and sustain $1 trillion in stock market value, don’t count out a come-from-behind victory. 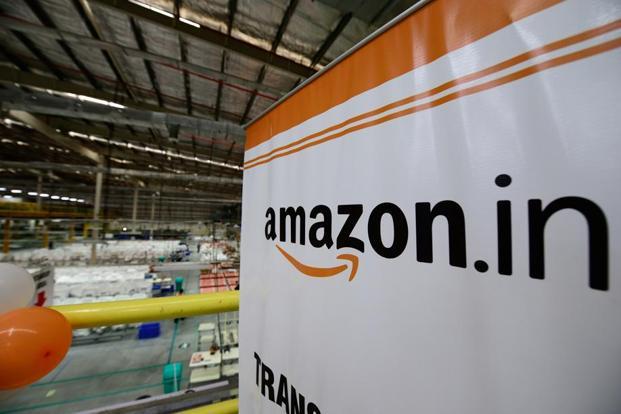 Apple Inc. has had a lock on its spot as the world’s most valuable public company by stock value for several years, and we’ve been waiting for it to crest the $1 trillion market cap milestone. The company inched within $50 billion of that mark in early June before its share price retreated a bit. 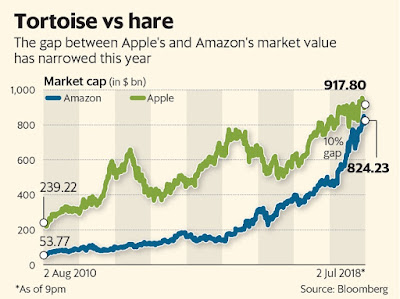 Amazon, though, is coming up fast.
At the beginning of this year, Apple’s stock market value was 50% bigger than Amazon’s. Now the gap is about 10%. The spread between the two companies was about $85 billion as of Friday’s US market close. That is a big but not insurmountable gap if Amazon keeps up its torrid stock gains. In 2018 alone, the value of Amazon’s shares has climbed $260 billion. Yes, Amazon has added the equivalent of Walmart’s total market cap in just six months.
Amazon’s position among the stock market’s elite would have been tough to predict a few years ago. In 2011, when Apple (briefly) topped Exxon Mobil for the first time as the most valuable company in the world by market cap, Amazon was barely in the top 50.
Amazon only found its groove starting in 2015, and since then it has been on a tear as investors started to believe in Amazon’s strategy to spend like crazy to try to become ingrained into every aspect of people’s lives.
As Amazon’s ambitions have increased, investors have grown more excited about the size of the company’s financial opportunity. The company’s two main business lines, retailing and information technology, represent $20 trillion and $2 trillion of annual spending, respectively. Amazon captures a tiny share of each category, and if it manages to grab bigger chunks, then it is sitting on a gold mine. And that’s before addressing Amazon’s potential to crack additional lucrative areas such as health care and advertising.
But the Wall Street analysts who track Apple, Amazon and other technology superpowers aren’t necessarily predicting any of them will hit $1 trillion soon. Using their average 12-month stock price targets for the largest US technology companies, analysts peg Apple’s target market value at about $974 billion, with Amazon and Microsoft behind it.
The $1 trillion market cap is a vanity milestone. But the fact that Amazon is even in the conversation shows how much has changed quickly in investors’ faith in Amazon’s strategy and its ability to worm its way into more nooks of commerce.