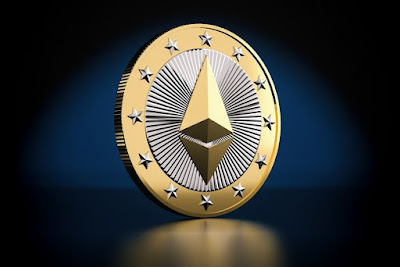 Ethereum (ETH) Price Prediction – Ethereum has experienced a price increase of 13.37% from low to high over the past 7 trading days. At the time of writing, Ethereum is currently trading hands at $470 and has lost 2.27% over the past 24 hours.

Created by Vitalik Buterin, Ethereum was designed to become a decentralised computing system to allow decentralised applications to run on top of. Many altcoin projects have elected to use the Ethereum blockchain as their main chain issuing ERC-20 Ethereum based tokens as their tokens.
Ethereum had recently been under fire regarding its transaction speeds. Ethereum can currently handle 25 transactions per second. This is tiny compared to the 1000s of transactions per second that Ethereum rivals can achieve. Ethereum became blocked up as the dapp CryptoKitties clogged the blockchain up causing backlogs of transactions for days.
Ethereum is currently ranked second in terms of overall market cap across the entire industry with a total market cap value of $47 billion. Ethereum has lost up to 22% over the past 30 trading days.
Let us continue to analyse price action over the long term.
Price analysis
ETH/USD – LONG TERM – DAILY CHART 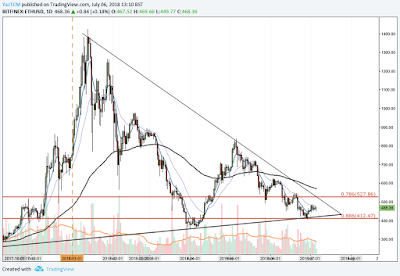 Analysing the chart from he long term perspective above, we can see that the Ethereum market had experienced a bullish run toward the end of the year 2017, when price action rose from a low of $275 on November 2nd 2017 to an all time high of $1424 placed on the 13th of January 2018. This was a 400% increase in price from low to high.
After placing the high price action went on to depreciate, falling to a yearly low of $358 in April. The market had found support here as it was located near th .886 Fibonacci Retracement priced at $412. The Fibonacci Retracement was taken from the entire bullish run outlined above.
We can also see that the market has been trading within the confines of a very loose, symmetrical triangle. Price action has recently bounced off of the lower support boundary for the triangle.
If price action can break above the .786 Fibonacci Retracement, then this would leave the market open to continue to trade higher.
Let us continue to analyse price action a little closer over the more recent period
ETH/USD – SHORT TERM – DAILY CHART 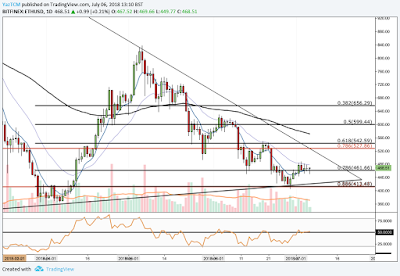