Hi, friends welcome again I hope you are doing well. Today we are going to discuss the KKR vs RCB match analysis and Head To Head Team. The next match kkr vs rcb is going to be held on 20th September 2021. Let’s analyze the match.

Kolkata Knight riders would not have enjoyed the first leg of the IPL, as they won only 2 of their 7 games. They bank on youngsters at the top of the order, as well as in the bowling department.

Royal Challengers Bangalore have got the perfect opportunity to lift the IPL trophy this year. They are currently placed at the third spot in the standing with 10 points

Devdut Padikkal : – Devdutt Pedikkal is the next big thing in Indian cricket. He will be acclimatized to UAE condition since he made his IPL debut last year in this country. The 20years old southPAW has musted 195 runs in 6 matches in this IPL at an average of 39.

Harsh Patel :- ven through Harshal Patel has an economy of 9.17 in this IPL, it is his wicket -taking knack that makes him the real deal. He is the leading wicket-taker so far, having picked up 17 wickets with the best figure of5/27.

Subhaman Gill: Shubman Gill has managed to score 132 runs in 7 matches in this year’s ipl. The KKR opener has maintained an average of 18.85.

Nitish Rana: Nitish Rana had a great start to his campaign in the first leg of the IPL. the Delhi-born left-handed batsman has scored 201 in 7 matches at an average of 28.71.

Andre Russell : Andre Russell is a powerhouse, especially in this format. There is no stopping him when is on the song and his ability to bowl at the death over makes him a real asset for any team.

Ab De Villiers: whatever the condition and situation may be, Ab de Villers on any day is the savior for RCB. He has won plenty of matches single-handedly for his team. In 6 innings an excellent strike rate of 164.28

My HEAD to Head team (Not final) 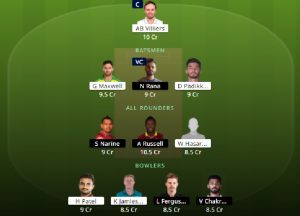 Since the track is neutral once, we have opted for a balanced setup. While we have selected four bowlers, we have evened things out by picking captain and vice-captain from the batting option.

In this post, I share analyze of KKR VS RCB match. I shared my thoughts. You can go with your won team. Remember this is not a final team. I have no idea about final Lines UP. You can change or rearrange your team after lines up out

realme UI 2.0 based on Android 11 Schedule