Home Uncategorized Oxy-fuel cutting processes
Oxy-fuel cutting is processes that use fuel gases and oxygen to cut metals. Most commonly fuel gas are acetylene, natural gas, propane, hydrogen, propylene, liquefied petroleum gas (LPG), and combinations of these gases. In oxy-fuel cutting, a torch is used to heat metal to its kindling temperature. A stream of oxygen is then trained on the metal, burning it into a metal oxide that flows out of the kerfas slag.
Before cutting,the cutting torch has to pre-heat the metal to ignition temperature at the starting point, the steel has lost protective properties against oxygen and is still solid. Pure oxygen is then directed through the nozzle at the heated area. This fine and high pressure oxygen stream changes pre-heated and unprotected steel into oxidised liquid steel by an exothermic reaction. 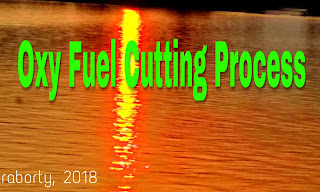 Appliance
The appliance used in oxy-fuel cutting process are oxygen cylinder, fuel cylinder, pressure regulator, non-return valve, flexible hosepipe, Cutting torch.
An oxygen cylinder is an oxygen storage vessel, which is either held under pressure in gas cylinders, or as liquid oxygen in a cryogenic storage tank.

How to crack RRB NTPC 2019: Preparation Tips and Strategy to crack

How to Watch Live Cricket without hotstar – 2020