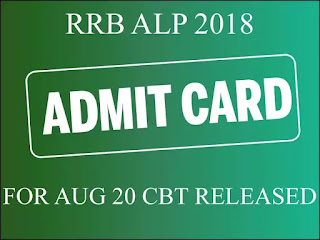 For August 17 exam, the admit card was released on August 13, 2018. The RRB ALP 2018 examination is being conducted in three shifts, and candidates are getting similar questions in all the three shifts.
In the first stage exam, around 1,19,110 candidates out of 1,11,332 appeared for the exam at 416 centres across 160 cities of the country.
“Attendance in the very first shift is highly impressive, setting a record for all railway recruitment board exams so far – both for offline-based exams as well as pan-India computer-based test – since 2015,” a railway ministry official said.
The Computer Based Test (CBT) 2, Aptitude Test and Document Verification dates are yet to be announced by the board.
Earlier, the Board had released the calendar of issuing admit card for ALP and Technician which are scheduled to be held from August 9 to 31, 2018.
The admit card for the 1st stage Computer Based Test (CBT) will be released four days prior to the scheduled exam date, for example if the exam is to be held on August 9 then candidates can download their admit card from August 5, 2018.
The candidates can download the RRB ALP & Technician Admit Card and RRB Group D Admit Card from the official website – indiarail.gov.in.
RRB would be conducting the First Stage CBT for RRB ALP & Technician Recruitment 2018 from August 9 to August 31, 2018
The exam for ALP & Technician is slated to be held on August 9, 10, 13, 14, 17, 20, 21, 29, 30 and 31, 2018.
No call letters would be sent via e-mail. Candidates please note that admission to the examination hall, without the call letter, is strictly prohibited.
Around 47 lakh candidates have applied for the examination.
SCHEDULE FOR THE REMAINING E-CALL LETTER DOWNLOAD FOR THE 1ST STAGE CBT
STEPS TO DOWNLOAD RRB ALP & TECHNICIAN ADMIT CARD 2018
1) Log on to the official website: indiarail.gov.in
2) Click on the Download
RRB ALP Admit Card
2018 link. A new window would open
3) Enter your registration number and date of birth to your account
4) In your account, click on Admit Card and then click on print option
5) Carry the e-hall ticket on the exam day.