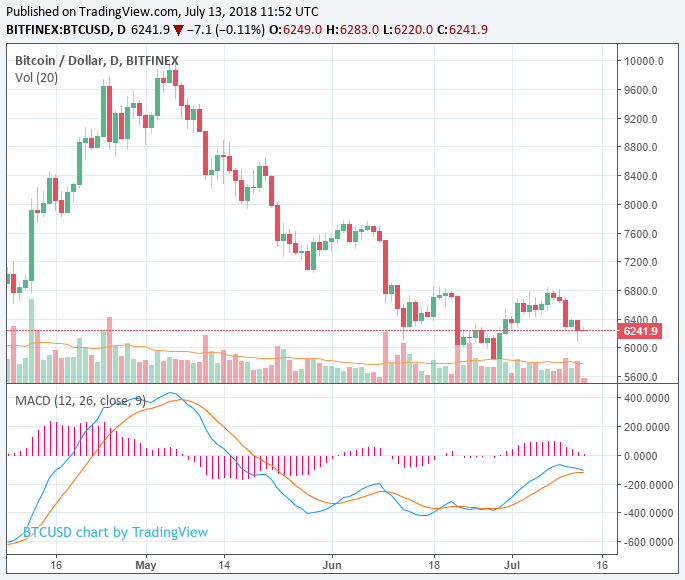 Lack of Momentum and Volume

The slight increase in the price of bitcoin from $6,070 to $6,250 has allowed the dominant cryptocurrency to break out of a descending trendline since July 10, setting up a corrective rally in the short-term. The Relative Strength Index (RSI) of bitcoin has also demonstrated a bullish trend for bitcoin in the upcoming days, increasing the probability of bitcoin’s recovery to $6,400.
However, the lack of volume of bitcoin still remains as the issue for the crypto market and other digital assets like ether, Ripple, and Bitcoin Cash, because in a downtrend, both major and minor digital assets tend to rely on the price trend of bitcoin.
Currently, as of July 13, the daily volume of bitcoin remains at around $3.5 billion globally, and $163 million on Binance, the world’s largest crypto-only exchange. In comparison, in early July, the volume of bitcoin surpassed the $5 billion market and remained above $300 million on Binance against Tether (USDT).
Hence, even though the RSI, MACD, and descending trend lines of bitcoin demonstrate a bullish movement for BTC in the upcoming days, the lack of volume of BTC will likely prevent the market from initiating a proper corrective rally in the short-term.
Based on the trend of bitcoin over the past 48 hours, it is unlikely that BTC initiates a corrective rally to its previous support level at $6,700. A more likely scenario is, BTC falling to the lower end of $6,000, experiencing severely oversold conditions with the RSI below 30, and rebounding by several percent.

This week, Coinbase CTO Balaji Srinivasan and Ethereum co-creator Joseph Lubin have said that the “buidl” phase in crypto, which refers to a period in which developers and blockchain projects build infrastructure that is necessary to support large decentralized applications and a significant number of transactions on the public blockchain, is important for the industry to prepare for the next rally.
Upon the initiation of the next rally of crypto, which many experts including Abra CEO and BitMEX CEO predict would occur by the end of 2018, the crypto market would have trusted custodianship in place, secure and efficient two-layer scaling solutions like Plasma, Sharding, and Lightning, as well as innovative decentralized applications that could fuel the adoption of the blockchain.
“[Ethereum is moving] into a space where it can serve as the layer one trust system, and built into Ethereum we’ll have hundreds of thousands of transactions in the layer two systems and we’re going to see that ramified this year,” Lubin said.
In the short-term, the value of cryptocurrencies may continue to fall down further, due to the strong downtrend of the market and the lack of volumes on major digital assets. But, the bear cycle is crucial for upcoming rallies, that will require robust infrastructure on the public blockchain.
Featured image from Shutterstock. Charts from TradingView.